Silica or sol-gel based solid phases in glass microdevices are normally employed for DNA extractions but have several disadvantages including the difficulty in reproducibly packing the channel and the cost of the glass devices.  Polymeric devices provide for a cost effective method to produce microdevices which could be disposable, and current fabrication methods allow for establishment of a polymeric matrix within a microchannel during the fabrication process. This project will investigate the designs utilized in generating a highly reproducible solid phase, and the derivatization of the phase for extraction of DNA from these polymeric devices.  This device will be used to perform extractions of samples including blood, cells, frozen tissue, and laser-microdissected histological tissue which can play a major role in cancer research.

Messenger RNA expression analysis requires isolation of RNA from biological samples, followed by reverse transcription-PCR (RT-PCR) amplification and separation of target amplicon to identify the sample.  The method is based on the inherently variable mRNA expression from different cell types, producing gene-specific patterns which can be verified by the presence of a unique mRNA expression patterns.   Recently, Juusola et al. [1] described a method using mRNA expression to identify specific body fluids.  To obtain mRNA for the transcription and amplification necessary for gene expression analysis, RNA must first be isolated and purified from the biological source of interest.  Consequently, a robust system for purification of RNA will be essential as the development of messenger RNA expression analysis methods unfold.  A closed microfluidic, silica-based purification system would represent a significant improvement to current methodologies for RNA extraction, which often involve time- and reagent-consuming organic extractions, by decreasing the opportunity for introduction of contaminants and RNases, as well as reducing the amount of sample, reagents, and time required to perform this delicate isolation.  The application of a silica-based microchip solid-phase extraction method for purification of RNA as a precursor to mRNA profiling would be also be a promising step toward simultaneous DNA and RNA purification technology, permitting a more comprehensive genetic analysis from a single source.  In addition, development of a single-process RNA purification device represents the first step towards creation of an integrated micro-total analysis system (μ-TAS) capable of total mRNA profiling.  Work with silica and alternative phases to silica for extraction of RNA is underway for use in genetic analysis as well as clinical diagnostics. 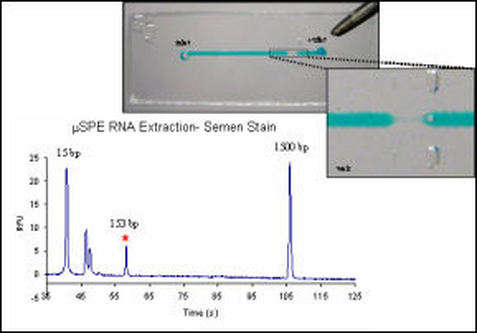